Upon hearing how The Master Cleanse works most people immediately know that it isn’t easy. But, fortunately there are many strategies that improve the chances of success that one can implement.

Another very powerful strategy going into doing The Master Cleanse, especially when doing it for the first time, is to make sure your schedule doesn’t have any big events, where you will be tempted, if not overwhelmed into eating. Even the smallest event can have the biggest temptations. 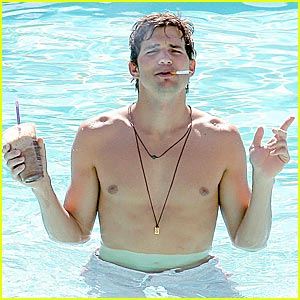 According to recent blog post, Ashton Kutcher arrived in Australia a few days ago to open his new film “Killers” and also declared he has quit the Master Cleanse.

Hmmm, travel, and an international red-carpet feature film opening by a movie star. That sounds like a very hard period of time to choose not to eat solid foods and tote around a lemonade concoction, answering questions from EVERYBODY who see’s it.

I have to answer questions to random waitresses and friends who haven’t heard of it. I am a no-one. Imagine being Ashton, traveling in Australia doing press junkets to open a feature film. HA.

It’s no doubt you quit Ashton, and it happens to the best of us.

I just hope you quit more slowly than that 12 oz Kangaroo steak. Maybe a day of kiwi smoothies first? Or else that Kangaroo may be kicking around inside of you for a few more days than expected. I had a friend quit the Master Cleanse abruptly by eating a Burger King Veggie Burger, but this is the first time I heard of quitting the Master Cleanse with a Kangaroo Steak:

Don’t worry though Ashton. The planning thing is  a common pitfall. Weddings, holidays, office parties. All these need to thought about in advance to avoid conflicts and temptation.

I hope you try it again when you have 2 weeks of down time with the Misses where you have nothing to do but relax, appreciate each other, the cleansing process, and the clarity of mind that comes with it.

No word yet if Demi has quit the cleanse or not. It doesn’t seem like she has travelled with him to Australia. Good Luck Demi, and better luck next time Ashton.