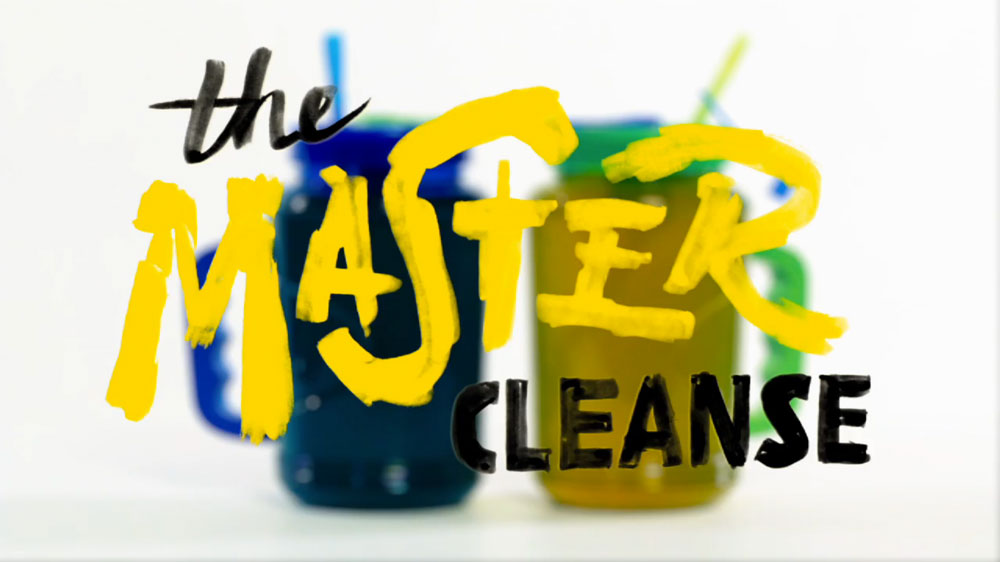 A recently released short film about The Master Cleanse which was written and directed by Writer/Director Todd Strauss-Schulson (A Very Harold and Kumar Christmas 3D) and Producer Ken Franchi (as well as commercials and music videos) have been making films since college. The movie is embed after the jump, scroll down to watch the very entertaining film. The pace is great, the acting brings the characters to life, and the directing/editing is polished specifically the scrabble title sequence in the opening scene. I would also love to license the opening credit sequence. It’s AWESOME!…

If you’re thinking about doing The Master Cleanse, be sure to read this whole article because even though we’re big fans of the piece, we do feel obligated to point out a couple of fallacies as it relates to the “Real Master Cleanse”, even though we’re pretty certain the filmakers took artistic license with the concept and didn’t intend to detail the common experience, rather and truly hilarious one.

Kelly and Scott – Committed to the Cleanse There’s no doubt this film is really good. It’s funny, well made and insightful into the untold compromises and even secret resentments between two people (Kelly and Scott) in a committed relationship. The film uses the pretense of The Master Cleanse as the catalyst for the couple to “Cleanse” their relationship of these hidden thoughts and emotions and to escalate into a no hold barred insult-fest that brings the cleanse crashing down from the climax achieved over months of biting tongues, turning cheeks, and rising above lashing out at the annoying aspects in life.

That’s the real theme of the movie: Honesty is overrated. And the cleanse breaks down our false walls and forces the truth toxins out of our bodies.

The movie’s characters Kelly and Scott, begin to show signs of irritability, or willingness to be honest (maybe too honest) with each other from the first sip of Lemonade.

The filmakers themselves say:

The Master Cleanse is a story about honesty and how much is too much as it follows Kelly and Scott, a normal couple who tell the occasional white lie to each other and make compromises to keep the relationship afloat.

Together they decide to try a fad diet called “The Master Cleanse” which is a 10 day fast where you only drink a concoction of lemon juice, water, maple syrup and cayenne pepper. After a few days the body will break down the fat in your body releasing the toxins that have built up.

What that diet doesn’t advertise is that if a person goes 10 days without food then they become really irritable. So irritable that they may not sugar coat their comments or actions anymore.   Scott tells Kelly that her morning breath stinks and he “cant take it anymore.”

The writing, and acting revel in this plot mechanism providing plenty of fodder for comical many laugh-out-loud 1-liners, of which two of my personal favourites are: “I resent you each time I see someone more attractive than you, and that’s like 6 times a day” by Scott, and “I keep repeating to myself, he’s better than nothing, but maybe… NO!”.

But it’s the last scene of the movie that reveals the truth of the nature of the cleanse when the couples friends leave their house following a day 10 emotional catastrophe over scrabble.

“What’s with you’re weirdo friends” the one says. “They do this cleanse every 5 months or so, to like clean out their relationship, something about being 100 percent honest” (before a ironic non sequitur statement that illustrates their own personal lies about what seems to be a very bad fedora).

While it’s true, that irritability can be a passing characteristic of the cleanse (usually associated with chemical dependancy withdrawal like caffeine, nicotine, and alcohol), it’s by no means the prevailing emotional experience. The hundreds of thousands of accounts attest to clarity, insight and psychological liberation to be far more prevalent than magically not being able to tolerate the lesser qualities of our significant others.

The Master Cleanse – A Creative Study

So for the record for you potential Master Cleansers out there, here’s a lovingly critical review of the concepts regarding the cleanse so that you might not be accidentally misled.

They Juice all in one JUG for the day: This is a critical mistake. The enzymes in the Lemonade become inactive. This is a very common mistake and clearly advised against by those in the know. Without t the active enzymes, the negative aspects of the cleanse, including irritability will be exaggerated. Going to social events is not a good idea, but what’s worse, they hold a party on day 10 to bring all the tension to a head. But again, maybe that’s the point. Poor friends, they should know better by now.

The social etiquette at the office is a key component to success. Again by carrying around the jugs of juice they cause themselves problems: “everybody in the office is making fun of you”, their co-worker tells Scott,  “You’re walking around like a giant toddler, slurping on your baby bottle and spraying diarrhea everywhere. It’s disgusting. You look terrible.” First, don’t flaunt the process. Only tell people you trust. Keep your process out of the public eye to avoid criticism. Secondly on this point, you don’t have diarrhea all day. The only movements occur in the morning. This is a major misconception and cause for people to fear the daily process. And besides being just a little smelly, the movements don’t “HURT” like when you’re sick. It’s more like a gentle release of fluid like from a tap. Gross for sure, but nothing to be afraid of like after your first day dining at Montezuma’s Cafe in Huatulco, Mexico.

The comment that “You Look Terrible” is very uncommon with proper cleansers. More often than not comments relate to an increase in vitality of the skin, eyes, and hair. People are often told how good they look. Again, this goes to not making the lemonade correctly. The enzymes are critical. Breaking the cleanse with Food AND CHIPS is clearly not a good idea. Do not break your cleanse immediately at the sound of your watch alarm with a plate full of food, especially fatty processed foods like chips unless you want to create an even bigger blockage that won’t be comfortable to pass when it finally does a few days later. Break the cleanse properly by doing the Ease-In

The big one is that they’re Irritable all the time is of course the premis of the story, but it’s also more of a examination of the FREE WILL TO LET IT OUT and that they intended to revel in the release of these negative emotional toxins and that they cleanse their relationship of them. Honestly, I think there is a lot to that aspect. Cleansing the emotional body is a key component to being a master cleanser.

Having said all that, and without further adieu, here is the short film: The Master Cleanse “Shit’s about to get real” (That title should serve as a warning to language and sexual and drug references –which I think is awesome ;).

THE MASTER CLEANSE from ulteriorproductions.com on Vimeo.

This short film was funded by Kickstarter, a social funding platform that I took a half effort attempt at using to finance my own creative piece about the Master Cleanse back in May 2011. With the audience of TheMasterCleanse.org as large as it is, I was hoping to capitalize on the desire to document the “Real” experiences of Master Cleansers in an interactive group cleanse to capture hundreds, or thousands of cleansers opinions, testimonials, rants, complaints, tirades, releases, praises, questions, answers, support and every other telling commentary that can only come from those doing The Master Cleanse.

The Master Cleanse in Reality

In the movie, it’s seems obvious that the “Actors” of course aren’t actually doing The Master Cleanse. Of course this makes sense in a traditional theatrical production. But it seems like perhaps the producers may have not done the cleanse either (check below for updates as I intend to send this review to the Todd and Ken to clarify their research on the subject matter prior to production).

The timing of the release also makes me wonder if the producers where aware of the spike in interest around the Master Cleanse at New Years. The film was released on Vimeo January 3rd, the exact day of the highest search traffic according to Google of any time of the year, when it triples to up to well over several hundred thousand  searches per day for keywords surrounding the topic. The Kickstarter campaign below is that of the producers, and the one at the bottom is my il-fated effort.

iMaster Cleanse (and I don’t want to stab myself in the leg ;)

Clearly I am not as advanced in filming as these two great talents (but one day here’s hoping)… But you can see the clear differences. I wish to approach the subject matter from a documentary perspective, but with a reality feel. I have considered the concept to follow 2 or 3 subjects with a crew, diary cams, and 24×7 cams to capture their experiences, along with empowering the thousands of Group Cleansers who do the cleanse at New Years, and throughout the year. We are busy with plans to reload, regroup, and re-energize for another run in 2012.

I want to state again how much I enjoyed the film. Besides the critical review of the technique of The Master Cleanse itself, it really was fantastic. I hope you enjoyed it as much as I did.